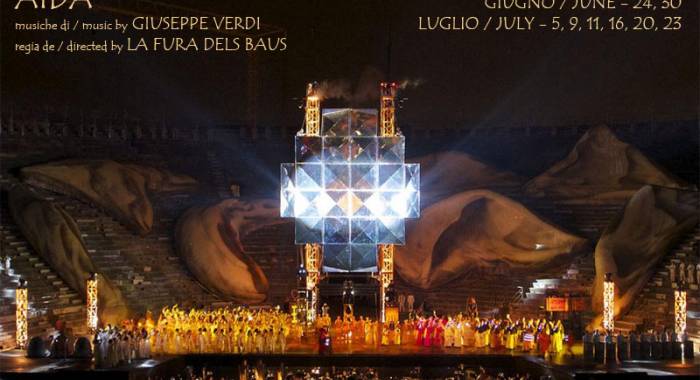 If you write "Aida" you will read "Arena". This concept has been for 100 years.
This production of Aida will be presented in the futuristic staging marked by the Catalan team La Fura dels Baus, that had opened with a great success the Festival for the centenary of the Arena of Verona , using the most spectacular and  scenic bit technologies. Aida is included into the program of the lyrical operas in the Arena of Verona 2017 and it will have up on stage carrying people into the opera with a great interpretative sensitivity and “voice perfection”.

Aida remains the greatest hit between the ancient roman rocks. It is the crown jewel among Giuseppe Verdi’s operas and it will be presented in a version intentionally timeless this year too. A version that for some people is still having its traditional nature with a modern perspective and for others, it proposes a more futuristic vision.

The opera is going to have up on stage for eight times each of which will be surely an unforgettable stop into the Giuseppe Verdi’s creative world that invites us to approach to the opera with the knowledge that we are facing to the origin of the wonderful revolution called ‘Verdiano theatre’.

Our country hotel b&b in province of Verona is the perfect place where you can book for Aida in Verona and also for the lyric season in Arena. You can find us less than 20 km from the Arena, in one of the most suggestive places in the countryside of Verona. See you soon!

« Placido Domingo in Arena, our country...