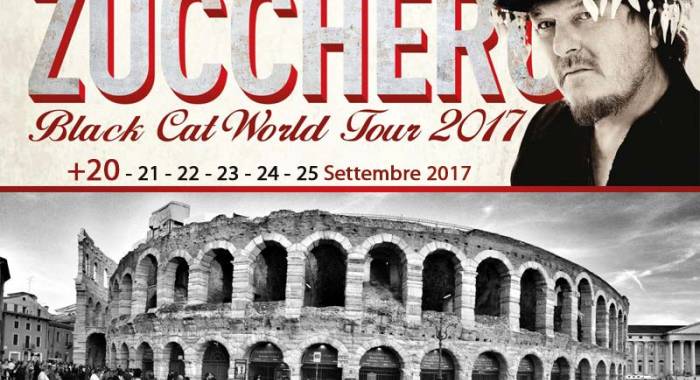 Adelmo Fornaciari, better known as 'Zucchero', is one of the mostfamous italian songwriter and musician who created the 'mediterrean blues' thanks to his ability to melt the American soul music and blues with the italian light music.

Anticipation is rising for the return in Italy of "Black Cat World Tour 2017" signed by Sugar Fornaciari who will be the protagonist, after the performance in May 2017, at the Verona Arena once more, in 6 live shows! Infact, by popular demand, a sixth date is added to the date concerts of 21-22-23-24-25 September in Arena, the 20nd SEPTEMBER 2017!

Zucchero returns to centre one of the most glamourous stage of Italy, with an amazing live concert at the Arena di Verona once more signing an all-time record of 22 dates at the Verona Arena in just 12 months: the Roman amphitheater has become the second 'home' of Zucchero who is always selling out with his unmissable and powerfull live concerts.

'I've been so bored at home so I go to the Arena of Verona. I really love this place because I manage to feel the public’s fire and also to appreciate who sings my songs'. (Zucchero)

We are waiting for you in Verona for Zucchero's concert in the Arena 2017 and  we invite you to book your room by contacting us at Otto Ducati d'Oro.

Where to sleep in Verona for Cosmobike...