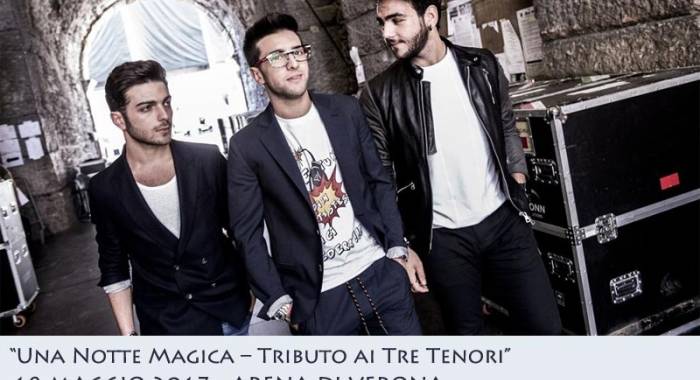 On 7 July 1990 these 3 singers gave an historical concert known as 'The three Tenors' on the eve of the World Cup final match in Italy (1990) at the impressive Roman baths in Caracalla, in Rome. That concert was organized in  order to collect funds for the Carreras’s foundation and in order to celebrate his return on the scene after he won his battle against leukemia.

So, Il Volo trio wanted to celebrate that famous big event in the story of the world music with a first tribute in Florence and a second one in the Arena of Verona in may 2017. The trio, compound by Piero Barone, Ignazio Boschetto and Gianluca Ginoble will return to centre stage of the Arena of Verona with the tribute-concert in honour of Plácido Domingo, José Carreras and Luciano Pavarotti.

Our country hotel b&b could be the perfect basis for taking part to the Il Volo trio's concert on 19 and 20 may 2017. You can find us less than 20 km from Verona, in a peaceful place where you can relax in order to be ready to have an unforgettable musical evening.

Your relais in Verona for the program...