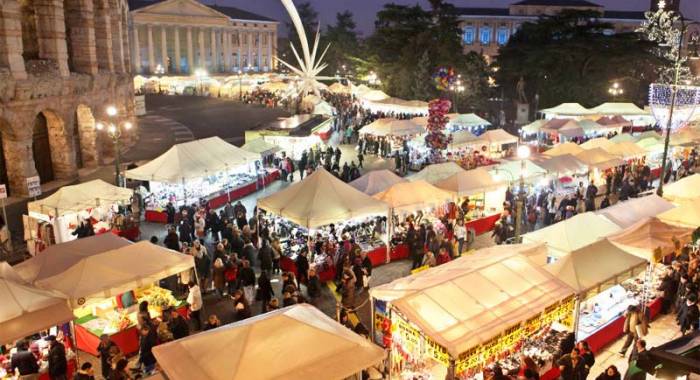 It's very popular and one of the most ancient traditions of Verona. People from all the province are involved in this event, especially for the little ones who from 10th to 13th December will spend happy evenings in company of mom and dad in Piazza Bra. The square will be full of St. Lucy's stalls, with every kind of toys and sweets.

So, in the centre of Verona, there will be the traditional St. Lucy's markets with stalls. She was the "protector of the eyes" and the legend tells that, every year, in the night between the 12th and the 13th of December, thanks to the help of Castaldo and riding his donkey that pulls a cart, she brings into all homes while children are sleeping (and must have done right behave throughout the year) the gifts they requested in the letter written a few nights before. Clearly, gifts and every kind of sweets!

St. Lucy's markets are one of the special events that come first Christmas Time, surrounded by an historical and cultural city that only Verona can be!

Verona has always been considered the meeting point of tradition with culture and, as every year, during the Christmas period it starts to bright with its flouting many Christmas lights thank to "Verona si veste di Luce"project and many Christmas Trees in different places of the city centre were installed. The colours and the music of Christmas accompany the tourists deep in the heart of this sort of 'painting': Piazza Bra and the Arena in the background and the wonderful Christmas star.

The traditional Christmas markets in Verona, the Christkindlmarkt will open their wooden windows of the stalls in Piazza dei Signori, in Cortile Mercato Vecchio and in Via della Costa from 7th, November to 26th December, in order to offer you the opportunity to immerge into the fairy atmosphere that only a city like Verona can have.

Our Relais might be the perfect starting point for "Verona Christmas Run" fans, a marathon that is always loved by sportspeople and run-lovers. Piazza Bra will turn red and white and is getting crowded of numerous groups of "Santa Clauses" who will be ready to start the 5k or 10k, non-competitive, Christmas marathon around Verona on December, 17th, 2017.

Staying in Verona, you will be able to take part to the interesting appointment of the 34th edition of the "international review of nativity scene in art and tradition sector" into the Verona Arena, under the big star that symbolizes the exposition and ideally connects Verona to the other cities. The exibition will soggest a totally renewed review with over 400 nativity scenes from all over the world and many operas based on the "nativity" theme granted by lots of the biggest European Museums that have preferential relation with the city of Verona. Nativity-scene masters, collectors, craftmens and lovers are the main characters of this exhibition pf nativity scenes in which a cultural and artistic framework about the tradition of the nativity scene will be presented in different geographical context from 7th December, 2017 to 12th January, 2018.

Our advice is to contact our country hotel b&b Otto Ducati d'Oro of Isola della Scala, only few chilometers away both from the centre of Verona and Mantova, and book your room and don't miss the opportunity of take part to the typical and beautiful Christmas events of 2017 in Verona.

What doing for the Imaculate’s Day...