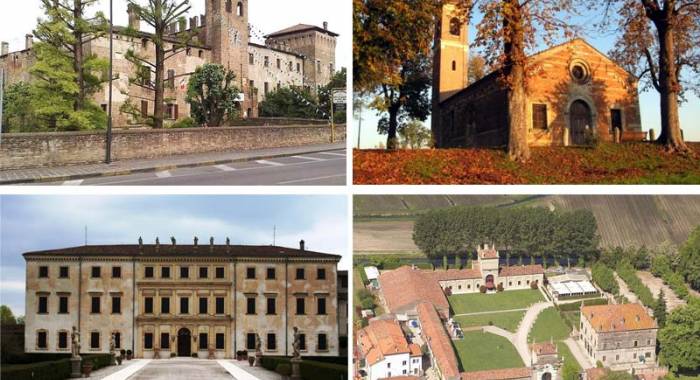 Castles, villas, churches and museums dotting the whole territory of South of Verona can't go unnoticed in the eyes of business travellers and tourists who pass through our area.

Among the historical monuments deployed in the numerous villages of South Verona, castles were part of the fortification system that Scaligeris strengthened since the thirteenth century; even today you can see the vestiges in Sanguinetto, Salizzole, Isola della Scala, Oppeano and Nogarole Rocca.

Churches are often small but ancient and remarkable along the route: from the Sanctuary of the Bastia in Isola della Scala of 1126 to the small romanesque church of Santa maria Novella dell'Erbedello near the Tione river in Erbé.

In Gazzo Veronese on tartaro river, there is the church of Santa Maria Maggiore with the rests of some mosaics realized between the VIII and the IX Century. In Cerea there is the church of San Zeno that according to tradition it would be built by the will of Matilde di Canossa. it is a remarkable example of romanesque building. On the route between Bovolone and Concamarise there is the small church of S. Giovanni Battista in Campagna (St. Jhon the Baptist), well known as S. Zuan, which origins date back to the VIII century.

Many villas were born to witness the wealth and power of households that invested in landholdings and in the rice cultivation creating important agricultural and rural courts. Between the most remarkable there are Villa Pindemonte in Vo' di Isola della Scala, Corte Dionisi Gobetti in San Pietro di Morubio, Corte Verità Malaspina in Concamarise, Villa Marogna in Nogara, Villa Zambonina in Vigasio, Villa Vecelli and Grezzano in Mozzecane, Palazzon del Diavolo in Sorgà, Villa Montara in Oppeano.

In the territory of Route of IGP Vialone Nano Rice there are some small museum such as the Archaeological Museum in Gazzo Veronese that lies in the fifteenth-century villa Parolin Poggiani and the Archaeological Museum in Isola della Scala in the former church of the friars that houses finds from the Iron Age period up to the medieval period. In Bonferraro, at Corte Brà dall'Oca there is the Museum of Rural Life and in the eighteenth-century villa Pindemonte - Fiumi, headquarter of the Town hall of Roverchiara you can visit the Lionello Fiumi Museum, entitled to this great poet of the early twentieth century who lived here.

A wide range of routes and itineraries to follow and to visit: our country hotel 8 Ducati d'Oro is pleased to host and offer you a relaxing overnight stay after a day full of history, art and culture. We invite you to take this opportunity and contact our hotel in order to organize your stay in Isola della Scala.

« The Road of the rice vialone nano...