Walk to the Sanctuary 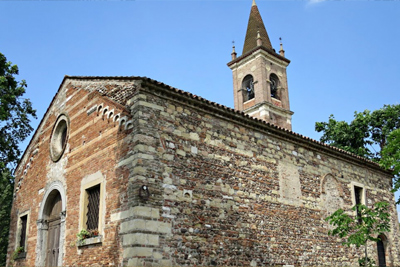 About 5 minutes from the Otto Ducati d'Oro hotel

There is another short but interesting walk to reach the Santuario della Bastia, which is clearly visible from our hotel. Secluded in the countryside, the Chiesa della Bastia sits on an elevation at the edge of the valley depression of the river Tartar and is the oldest evidence of the village of Isola della Scala.

An inscription set on the facade, on the left side of the gateway, features the names of the builders and the year it was built, 1126: "CHEBIZO WARIENTO ET ANNO + A.D. MCXXVI HOC OPVS FECERVNT", that is "Chebizo, Wariento and Annone and built in 1126". There is a similar inscription on the wall of the bell tower, stating: "ANN DNI MICXXX WARIENTO ET ANNO RS HOC INCEPER", meaning "the year of our Lord 1130 Wariento and Annone headed this enterprise".

The name refers to the existence of a "bastita", i.e. a defensive shelter for rural populations built in 1400 and that soon fell into disuse. The church has a single nave, with trussed roof and three altars. The pinnacle of the bell tower dates from the 1950s and was built by the abbot, Monsignor Fontana. The apse shows that Roman bricks have been used and inside it there are 15th-century frescos.

« Walk to the Tower
Walk across the Tartaro Valley »
By using our website you agree to the use of cookies. Informations ok